We're back from the South Carolina Qualifier, and it was a great day for Live Oak Martial Arts. Sam Ainesworth and Sam McClain both won a Gold and a Silver each!

Ainesworth went first, and did a strong version of Yul-Go pattern. His highest score was an 8.6, and he made the Silver. Then it was McClain's turn, and she did a very snappy version of Jhoon-Gun pattern, scoring an 8.8 as her highest score, and just edging out her opponent, whose form was also very good.

Then it was time for Olympic-Style Sparring, and Ainesworth squared up against a scrappy little fighter who threw about three hundred roundhouses in the first round. Down by two, Ainsworth started the second round relaxed and fought a great counter-fighting game, keeping his opponent scoreless and getting five points and the gold medal! It was a great come-from-behind victory.

McClain squared off against her toughest opponent yet, a girl about a foot taller with quick roundhouses that landed hard. Sam pressed the attack, running her opponent out of the ring on several occasions. She landed roundhouses to the body and head, and several reverse punches. Despite being greatly outsized, she showed huge spirit, and, never backing up a step, scored nine points and won the silver and the crowd.

It was a fun day of great action and Tae Kwon Do. Can't wait till Georgia's qualifier. Congratulations, guys! 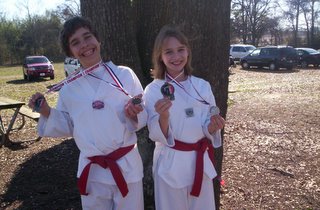 "I am learning Tae Kwon Do to make myself stronger," says Emelianenko
Fedor (30), aka the "Ice Fist," who has come to Korea for the first
time. Pride FC's heavyweight champion said in a press conference at
Seoul's Lotte Hotel, "Personally I think that Russian Sambo is the
most powerful martial art, but to increase my kicking ability, I am
focusing on Tae Kwon Do now." And he added, "In competitive fighting
practice, Tae Kwon Do is indispensable". Fedor and his younger brother
are in the midst of a five-day trip to the country to promote Sambo at
the invitation of the Korean Sambo Alliance. An acronym of the Russian
words "SAMozaschita Bez Orujiya", which means "Self-Defense Without
Weapons", Sambo is Russia's unique martial art.


We're having another Olympic-style Sparring Session on Saturday, from 4-6 pm, for any AAU TKD member who wants to train. "Do Your Best!" to both Sams, who are competing next weekend.


We will be Open on Monday, MLK Day.


We'll be having two Olympic Sparring sessions coming up on the next two Saturdays from 4 - 6 p.m., for those competing in the upcoming tournaments, and for those who just want to spar!